Water to Fire! We are completing one phase of purification and preparing for the next.

I haven’t given a energetic update of the Azoth energy for awhile now.  Then on the day Mars went direct I was given the visual of the next phase to come, which is fire.  As I have written before, “Azoth” is fire water.  These two elements work together, but apparently they will take turns being in charge.  When water is dominant it is not merely the water element we are familiar with.  It is the Azoth version of water that contains some fire.

The impact from the water of the Azoth began back  in Spring of last year.  Here is a link to the article where we explain the beginning of this process.   LET THE LIVING WATERS OF THE DIVINE MOTHER REBIRTH THE EARTH.  The title of the article speaks for its self.  It was the initial stage of the Purification process that the ancients wrote about.  ct

The influx of the Divine Feminine Water energy came in with a rush of energy during September of last year, known as Wave X.  This was a big deal, but in the large scheme of things, it was just the tip of a large iceberg that I am beginning to clairvoyantly see.  I am not the only one. Others are “seeing” this as well, each in our own unique way.  It makes so much sense to me that I am seeing the next phase now, and for me personally I saw it on the day Mars went direct.  While Mars was in retrograde it was gearing up for its next job.  Now it has gone direct and is on a war path, with its mission being implemented soon.

Currently, today…It’s like we are in the middle of Noah’s energetic flood.  The Divine Feminine Water energy that I saw coming last year, has reached its peak.  The tsunami wave X that came in last fall has continued to increase, just as all waves do, and it has covered the planet.  I don’t see this wave of Azoth receding, but staying, waiting for the next phase to be added to it.  Many energetic bodies are literally drowning in this energy and cannot keep up on the physical level.  They fight to get their heads above the water, just to fall beneath again.  Wave X, which is technically Azoth rose too fast for them.  Far too many are “trapped” under water, and are unable to breathe in the new energy that is available to them.  These are the people that are stuck.  They are still fighting old agendas for various reasons and refuse to let go etc…  I am sadly feeling that many physical bodies will be leaving us in great numbers.  They need to be able to breathe.  This is not only true for our physical bodies, but it is true for our energetic bodies.  Right now, those that are stuck are only halfway breathing.  They can’t continue this for a long period of time.  How this will occur, I have no idea, but I do “know” it will not be in a way we think it will be.  We are in the middle of the greatest transition this planet, Universe and beyond has ever gone through, and we need to throw out any past pre-conceived ideas about what will happen.  I try to limit my information based on what I have “seen” and experienced first hand, and even then, it’s always being added to.  All of us are on a need-to-know basis.  We have enough to deal with in the current moment.

Now that the Divine Water energy is completing its job of purification and cleansing, we are preparing for the next phase of the Azoth energy wave, which will be FIRE.  It is not here YET.  I did receive the image of a blow torch.

The intensity made my body shudder, and it was a bit scary.  I could feel the Earth like a giant ball of not just fire, but a large thick blow torch.  The fire, like I said about the water, is not our normal fire element.  It is the Azoth fire element, which basically means the most intense version possible.  The Divine Azoth water will continue to stay, but will take back burner to the coming fire.  The Azoth water came in as a wave, the fire will come in as a blow torch.  All I can say is HOLY CRAP!!!!!!!!!!!!!  I can’t even imagine how this will occur.  If people think the Wave X of Azoth was intense, then they will not handle the blow torch of the next phase.  Azoth is the element of purification. This is not my information.  It has been written about for thousands of years.  I did write how the basic Azoth has also shifted from the old and is even more intense than it was in the past when it was used.  Yikes….

I do not know when the blow torch of fire energy will come, or how it will come.  My guess is not until next year.  I feel time is not an issue at this point.  When the water’s job is done the fire will come.  I did see the water remaining at the top still coming down, but like a heavy drizzle, and I see the fire moving up from the center of the Earth, like a blow torch.

We are heading into uncharted fiery waters.  On the positive side, I do see 100% that this very intense purification process will not be as harsh as it would have been, if we had not moved timelines and had not moved locations in time and space.  For those that are prepared for this it will be the time of the Phoenix for them, for others, well….

I am now also seeing a 3rd phase, which makes sense, since this energy is directly connected to the Trinity.   I can only assume at this point, that once the fire has completed its individual job, that the two energies will combine in total Hieros Gamos balance and take us to the new Paradigm.  I can’t even imagine what that energy will do to transform not only our boots-on-the-ground physical reality, but how it will change our 3D bodies as well.

I used to say buckle your seat belts and prepare for the bumpy ride, but that won’t work any more.  The time of buckling under is gone.  You either go with the flow or you will drown.  If you survive the energetic flood, you have to let go even more and just float above the fire where the water energy that will remain present in drizzle form will cool the flames of the blow torch.

Instead of saying buckle your seat belts, I will say grow the wings of the Eagle/Phoenix so you can fly above the fire storm that is on its way.

I leave you with this final quote:

Be a lamp unto yourself.
Don’t search for light anywhere else;
the light is already there, the fire is already there.
Just probe a little deeper into your being, enquire.
Maybe much ash has gathered around the fire…
Just probe deep inside, and you will find the spark again.
And once you have found a single spark inside you,
you will become a flame, soon you will be a fire…
a fire that purifies, a fire that transforms,
a fire that gives you a new birth and a new being.
Be a lamp unto yourself.

~ the Last words of Gautama, the Buddha

Here’s to flying high and soaring like the Eagle, 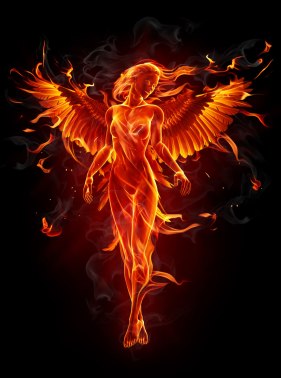 If you need assistance or advice with your journey, please schedule an appointment with me.  I use my clairvoyant abilities to help you remove blockages and move forward. Please read our website to explore what I have to offer.  You can also read my Bio on our page to see my qualifications. Click here to schedule an appointment….LINK TO SCHEDULE

If you are not familiar with what I do, here is an article I wrote.  CLICK HERE TO READ THE ARTICLE ABOUT MY SERVICES.   Or you may visit our website by clicking on the following link.  CLICK HERE FOR WEBSITE and schedule and appointment.

This article is copyrighted. I would love you to share, but please credit the author Lisa Rising Berry and provide a link to this blog.   Link to our website

7 thoughts on “Water to Fire! We are completing one phase of purification and preparing for the next.”

“Lisa, your work here is exceptional. I just read several of your articles relating to Aether and Azoth. They explain so much about the shift in energies that has occurred since 2012. And there is more to come as these are vast cycles. It is a good idea to go back and read all the articles to gain perspective on just how grand this transition is for the Earth and humanity. Thank you!” *Eliza Ayres*