8th Fire Prophecy Connected to Infinity and the 13th Gate

I came across a very old prophecy by accident.  I can’t even remember how it dropped in my lap.  I love it when the Universe works with us in schycronistic ways.  I have become the “Azoth girl,” as I have been writing about my knowledge and personal experiences with this energy for the past year. This ancient energy has increased in potency and even transformed into something bigger which is beyond Azoth.

So, I guess since Universe knows this about me, it led me to this ancient prophesy confirming that we have indeed made it to a grand mark in the planetary Ascension path.  This prophecy is called, The Prophecy of the Seven Fires – in which an 8th fire will be lit at the end of times!  It not only involves Azoth, but it also speaks of the Turtle, which is representative of the Divine Feminine energy that has returned to our planet.

The Prophecy, the 8th Fire and Turtle Island 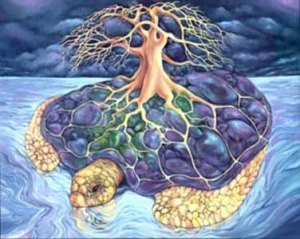 The Prophecy of the Seven Fires has been passed down by the  Ojibwe/Anishinabeg people of Turtle Island, the native name for North America, since their time began. The first six parts of the prophecy describe the migration of the Anishinabeg people from the Atlantic coast of North America to the Great Lakes and then the turning points faced with the introduction of European settlers. The prophecies span hundreds of years and seven generations in time.
It is at this time we have come to the final prophecy, which states:
“In the time of the Seventh Fire New People will emerge. They will retrace their steps to find what was left by the trail. Their steps will take them to the Elders who they will ask to guide them on their journey. But many of the Elders will have fallen asleep. They will awaken to this new time with nothing to offer. Some of the Elders will be silent because no one will ask anything of them. The New People will have to be careful in how they approach the Elders. The task of the New People will not be easy.

If the New People will remain strong in their quest the Water Drum of the Midewiwin Lodge will again sound its voice. There will be a rebirth of the Anishinaabe Nation and a rekindling of old flames. The Sacred Fire will again be lit.

It is this time that the light skinned race will be given a choice between two roads. If they choose the right road, then the Seventh Fire will light the Eighth and final Fire, an eternal fire of peace, love brotherhood and sisterhood. If the light skinned race makes the wrong choice of the roads, then the destruction which they brought with them in coming to this country will come back at them and cause much suffering and death to all the Earth’s people.”

An important concept in the Seven Fires Prophecy is uniting of the people (red, white, black and yellow).  This is something that must be done in order to assure peace and harmony and continue life on the planet.

The Sea Turtle is also a powerful Goddess symbol with 13 sections on its shell representing the 13 moons of a year and 28 sections surrounding that representing the 28 days between each moon, mimicking the female menstrual cycle exactly. The goddess energy (holy spirit) is also associated with the waters and the sea as we have discussed in an earlier blog post.   In Chinese and Hindu mythology, the turtle represents the joining of Heaven and Earth. The top shell is heavenly and the bottom shell earthly with the turtle’s body joining the two.

HOW THIS TIES TO THE INFINITY SYMBOL AND THE CHAKRAS

It is clear that in order for the 8th fire to be lit, we as humanity had to hit a critical mass frequency.  This was achieved, and the 8th fire was lit.  The Azoth fire water energy is increasing so quickly since it evolved, that I can hardly keep up with it.  Every time I get a handle on what it looks like, it changes, and so I clairvoyantly start all over.

One of the most significant points about this 8th fire has to do with the infinity symbol.  The infinity symbol has been a sideways symbol for such a long time.  It represented a closed system.  Once critical mass frequency was hit, the symbol “shifted” to its current upright position, which ignited the 8th fire.  Azoth and the upward infinity symbol are deeply connected.  Yes, Azoth has never left this planet, but the level has been at the lowest it could be and still remain here.  Now that the infinity energetic template for the Earth is in its upward and open position, we are fully receiving its transformational powers.  Since we are connected to the earth this has changed our energy centers as well!  I have noticed for some time now that our chakras do not look the same anymore.  In fact they have changed so much, that I can’t put it into words yet. At this point, we do not have 7 centers anymore. It is so much greater now.  They are more unified. This directly correlates with the 7 fires and lighting the 8th!  With the  the lighting of the 8th  fire and the return of the Azoth, we have risen beyond our 7 chakra system!

The very lucky number 13 plays an important role in this big puzzle.  The turtle is connected to the number 13 as its representation of the Divine Feminine, which is returning and showing us the way to the new paradigm.  The upward infinity unlocked the 13th gate that lead us to move above the plane.  (I wrote about this in a previous article)  The 13th gate is connected to Scorpio and Ophiuchus, and is the Golden Gate.  The upward infinity is the Golden Gate and the sideways infinity is the Silver Gate. The golden is a open system and the silver is a closed system.  Scorpio’s tail points to the center of the Milky Way, which is “home,” and Ophiuchus is the serpent bearer.  The snake has been the symbol of kundalini.  This symbolizes how the planet raised its kundalini in a upward motion, up the vertical infinity symbol.  Our DNA is currently moving from 12 stands to 13 as well.  We are leaving the system of 12 and moving into the 13.  And it just so happens to be Friday the 13th today, as we write this article.  I guess the reason we have been taught that 13 was unlucky, was because those that were in control did not want us to know the power of the 13 and how it unlocks the key to let us out of here.  It is the number of the Divine Feminine that has been demonized for centuries….  Well no more!  Rest assured, the power of the 13 and the Goddess energy is Rising and transforming everything that we know as our reality.

The 8th fire of the transformed Azoth energy is burning, the infinity is in its correct position, and we as humanity achieved what no one thought we could achieve.  We literally moved to infinity and beyond.  But let’s not forget that we have many friends who on a energetic level are still living in the old Earth energy.  We need to keep them in our hearts and let them know that we have the real home fire burning for them.  All they have to do is follow its incredible glow.

Below are links to the 2 articles we wrote about infinity and how it has moved to its current upright position.  And for those that would like to really study the book knowledge on Azoth, here is great article, it is one of my favorites…CLICK HERE TO LINK TO A GREAT AZOTH ARTICLE

Much love to all,

If you need assistance or advice with your journey, please schedule an appointment with me.  I use my clairvoyant abilities to help you remove blockages and move forward. Please read our website to explore what I have to offer.  You can also read my Bio on our page to see my qualifications.  Click here to schedule an appointment….LINK TO SCHEDULE

If you are not familiar with what I do, here is an article I wrote.  CLICK HERE TO READ THE ARTICLE ABOUT MY SERVICES.   Or you may visit our website by clicking on the following link.  CLICK HERE FOR WEBSITE and schedule and appointment.

This article is copyrighted.  I would love you to share, but please credit the author Lisa Rising Berry and provide a link to this blog.

“Lisa, your work here is exceptional. I just read several of your articles relating to Aether and Azoth. They explain so much about the shift in energies that has occurred since 2012. And there is more to come as these are vast cycles. It is a good idea to go back and read all the articles to gain perspective on just how grand this transition is for the Earth and humanity. Thank you!” *Eliza Ayres*